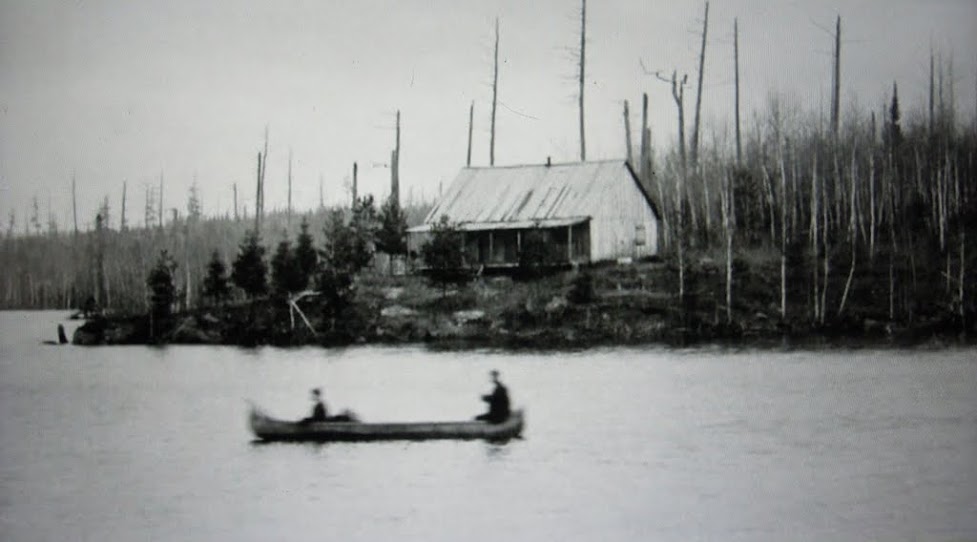 I was minding my own business when Martin Blecher came by in his putt-putt boat.

“Get out of the way! Can’t you see where I’m going?” He yelled at me as he passed me on Potter Creek. The wake from his boat made my canoe bob up and down.

Martin got an Evinrude motorboat last summer and now he thinks he owns the Lake. From what I could see, he had a pail of beer with him.

I knew exactly where he was going. He was going to see the train come in Canoe Lake Station. It was part of his daily routine. The No. 52 First Class from Depot Harbour came in every day at 12:23pm – just around lunch time. The eastbound freights and the lower classes came earlier in the morning. The No. 52 was by far the most interesting train to watch coming into the station because you never knew who or what would be coming off. Most Park visitors came in from Toronto or Buffalo.  They’d take the train north from Toronto, transfer at Scotia Junction, and make the final leg on the Grand Trunk to Canoe Lake Station – or more likely, Algonquin Park Station where the Highland Inn is. Joe Lake Station, only open in the summer, was 3 minutes down from Canoe Lake Station.

I was in my canoe, near the Canoe Lake Lumber Mill when Martin came charging through. He’s pretty proud and arrogant about his boat. There weren’t too many like it around. There was another one up by Cache Lake but the owner got drunk, broadsided three canoes and hit a rock or a deadhead. The boat went to the bottom of lake and he got rescued by the canoeists he hit. Martin’s saving grace, is that there are fewer canoes to hit on Canoe Lake.

I don’t have much to do with the Blechers. They keep to themselves and I don’t see them much. The Blecher cottage is just a bit south from the Trainor Cottage. Not too far away, but far enough to ignore everyone. There’s the four of them, Martin Sr. and Louisa, and their kids, Martin and Bessie. I wouldn’t call them kids, because they’re adults, but they act like kids. I hear them fighting often. Bessie is a teacher and Martin is private investigator (so he says) during the winter months when he’s back in Buffalo.

My view is that Martin is a blowhard. I never believed anything he said. He said he worked for the Burns Detective Agency. There was a new hotshot in the Department of Justice, J. Edgar Hoover. He ordered mass round ups of enemy aliens, mostly Germans but Russians too.  Burns did the dirty work of rounding them up. Martin said, the expression on an enemy alien’s face is priceless when you bang down their door at 4am. Made the job all the worthwhile. Needless to say, I didn’t like Martin. I did wonder out loud once that he was of German descent, may be was an enemy alien. Martin retorted that Hoover was German and Swiss descent, and he was the most red-blooded American there was.

So I guess Martin is a red-blooded American too. I was going to ask him why he was on vacation in Canada when his compatriots were being drafted and going off to war. I decided to not to say anything while on the water because a canoe is no match against a motorboat.