Dear Mr Thomson: I  would have answered your letter sooner but I have been out of town and did not get the letter until I returned. It is unfortunate that my inquiry was delayed in reaching you, but under the circumstances, it could be hardly avoided. It was, however, necessary for me to put the engraving of the brass inscription plate in hand without delay in order to have it ready when those intending to put it up could be at Canoe Lake. I had therefore to go ahead with the work and as this was done before I got to definite information as to Tom’s birth place and date, etc, there is a slight error on the plate as it stands. I am sorry for this, as I would have liked dates, etc, as correct as possible, but the fault is probably not of great importance after all as Tom was removed from Claremont as soon after his birth, Claremont can hardly claim much credit for his raising.

Nevertheless, as I say, I would have like the fact correct. I hope you won’t mind the error.

I have just returned from Canoe Lake where I spent the weekend helping Mr. Beatty to put on the plate and give the cairn a few finishing touches.

The cairn is a fine piece of work and with the brass plate in position, it looks quite imposing. It stands on a prominent point in Canoe Lake right at the head of the lake, facing south and can be seen from all directions. It is situated near an old favourite camping spot of Tom’s. I took a number of photographs of the memorial and will send you prints as soon as possible. It has been a great satisfaction to me to help in this work and the result goes a long way towards beautifying the tragedy of Tom’s death. The devotion of practically everyone at Canoe Lake in offering their help has been fine. Mr J.W. Beatty planned the cairn and directed and did most of the work in connection with its erection. I myself was not able to go to Canoe Lake until the cairn was practically completed, but I had no difficulty in appreciating the efforts of those concerned. Most of the stone had to be carried up a steep cliff about 60 feet high. All this stone had to brought a mile or so by boat and carried up to the site. There was probably over a ton of material in the cairn. Some of the helpers were soft-handed city men, who had not known Tom, but were holidaying at the Lake and cheerfully offered their services. I am sure, Mr. Thomson, that you will understand that I do not mention these things to give you any sense of obligation, but merely to bring out for you the noble side of the sad event they centred around.

I will write to you your daughters and your son George as soon as possible. and send you the photos mentioned without delay. The Globe of this morning gives an account of the cairn. Some of the other papers are asking for photographs. 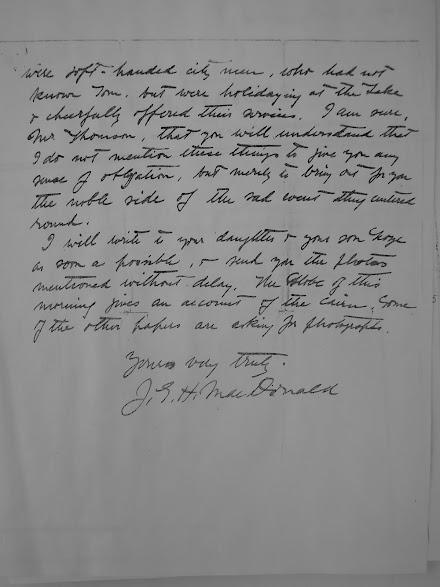 It was this time in September 1917 that the cairn was installed on Hayhurst Point in my memory.

In the hurry to have it installed there were mistakes made that made my father very upset. JEH MacDonald wrote a letter of deep apology. The letter’s full contents have never been made available. I hope to have available in the coming days.