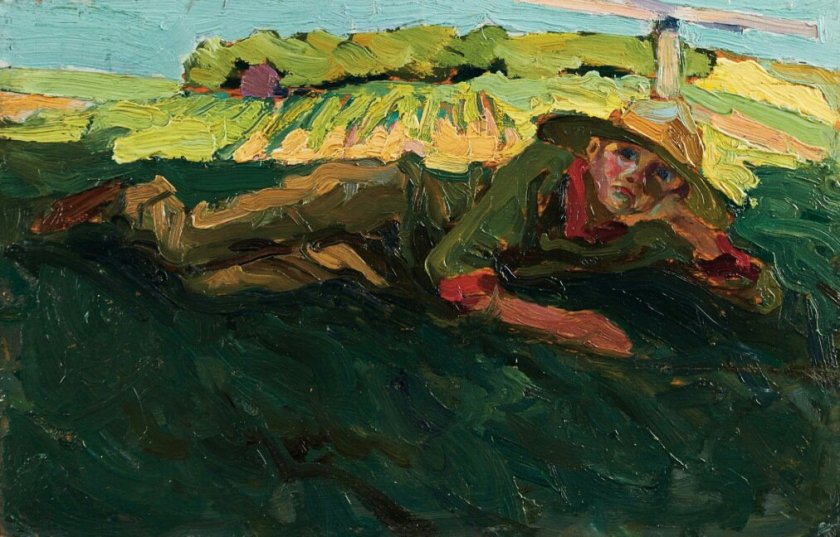 Thomson art historian, Joan Murray, while discussing “Near Owen Sound”, notes that Tom Thomson’s early career as a painter found him returning regularly to Owen Sound, maintaining a strong relationship with his large family. George Thomson, Tom’s oldest brother, provided great encouragement as Tom’s abilities continued to progress, both as a painter and a commercial artist and Tom felt great admiration towards George, a gifted artist and founder of the Acme Business College in Seattle (which Tom had attended in 1901).

During the time that “Near Owen Sound” would have been completed, Thomson had recently started work at Grip Limited Engravers in Toronto, a vocation that would not only bring him in contact with fellow artists who would help to shape and encourage his artistic life, but also introduce him to regular sketching trips throughout Ontario, bringing the artist for the first time to Algonquin Park in 1912. Murray notes that: “These trips changed the direction of Thomson’s life; in the fall, the budding artist invested in his first painting kit.”

Depictions of the Owen Sound area appear regularly in Thomson’s work leading to 1911 and Murray points to this painting as one of his best sketches from the period. As was quite common practice by the painter, “Near Owen Sound” would have been a gift from Thomson to his older brother. The sketch was kept in a drawer in George’s home and later was passed by descent to Dorothy Telford, George’s daughter. Painted at the beginning of one of Canadian art’s most revered and historical artistic progressions and careers, Joan Murray offers that “Near Owen Sound” marks “the emergence of Tom Thomson as a serious painter.”

We extend our gratitude to Thomson historian, Joan Murray, for her assistance in the researching and cataloguing of this artwork.
– See more at: http://www.consignor.ca/artwork/AW26012#sthash.LOWL1dZ5.dpuf