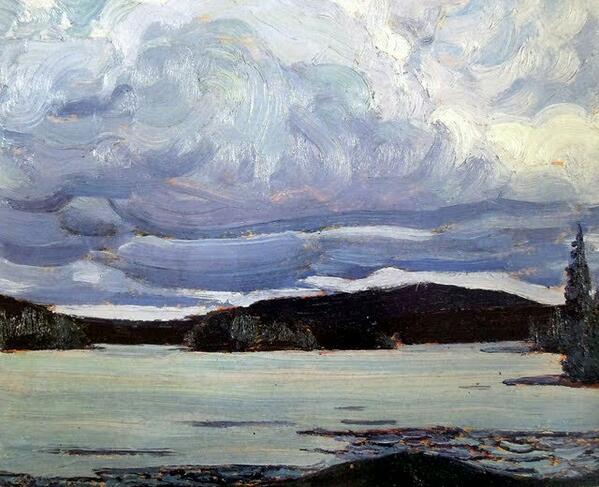 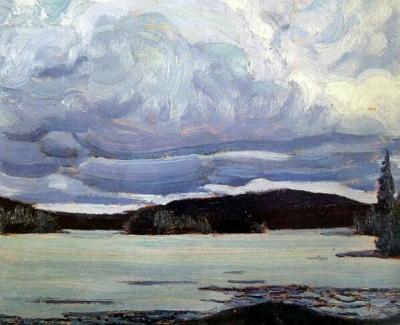 I made a sketch looking southwards on Canoe Lake. Big Wapomeo Island is in the middle. Gilmour and Cook Islands are right behind. The light today made the islands blend together and look as one. I finished the sketch later in the afternoon, just as the clouds started to roll in.

I walked out to the islands earlier in the afternoon. I had my snowshoes. I needed them because the snow is deep on the ice, but I also like to be safe and spread my weight. This time of year, you never know when and where the ice is rotten. Last year a team of horses went through on Burnt Island Lake. No man was lost but the horses and wagon were goners. Down to the bottom of the lake. They tried to fish the wagon out two months later in May, but gave up when someone said it should rest in peace like the Titanic.

When I was out there I looked around for a picture. Maybe the light wasn’t right, but I didn’t see anything. I tramped around Big Wapomeo, Gilmour and Cook Islands. Didn’t see anything inspiring. On the way back I passed Little Wapomeo Island. I saw the fireplace chimney I helped make for Taylor Statten last year.

I was about to give up on the lake and go inshore into the bush when I looked back. There it was. The low clouds were rolling in from the southeast making their way over the lake. I was almost at the same place as earlier, by the Trainor and Blecher cottages. I sat down and started sketching immediately because I knew the scene wasn’t going to last.

In the distance I could see a plume of smoke. Most likely from a lumber camp. The heyday of lumbering is over, and the land is but a shadow of itself. Once the easy and good lumber was gone it got less profitable, but the lumber companies got rights to cut pretty much everything they wanted.

In the winter, every lumber camp used to have eighty to a hundred men and each lumber company had five or six camps.  Upwards of two thousand men living in camps along the Petawawa, but now down to hundreds due to the depleted timber stands and the men going overseas.

Being in the bush in winter was the best part of life for these men. Everybody worked to do the most and the best, without harming themselves or each other. At night in the camps, everyone was jolly, singing and sharing stories. The troubles would only start outside of the camps, in the hotels of the towns, when the season was over and the men became drunk on their pay. In the middle of September, the gangs would go into the bush to build the camp. They’d live in tents until the middle of October and cut up until Christmas or a little after. They were happy men during the winter — they made their own fun at night and there was always a fiddler. Square-dancing, the girls being the men with handkerchiefs tied on their arms. After Christmas, the haul would start. Everybody concentrated on the log haul because they had to get out of the bush before the snow went. The logs were drawn out and dumped on the lake in a boom.

Like the logs during spring break-up,  the men too would come down the river in gangs of twenty to fifty men. They swept the river, bringing the logs into booms, pulling the smaller booms into the larger booms and pushing the booms toward the dams and the slides. Many times, the different gangs of the companies would help each other out, especially when there was a lost man on the river. First a frantic search, then when hope of rescue was lost, a sombre lookout as everybody returned to their duties. When the body eventually appeared (many times it did not), it was brought to the next campsite and a burial was made. Rarely was a body brought back to camp for burial. The wooden crosses, made to mark the graves, barely lasted through a season. But there were enough in view from the shore to remind us of the dangers of the river and the untold stories of grief. The lumberman made songs about these stories, like the one about a French-Canadian shantyman who never returned to his sweetheart.

During the time I was on the Petawawa, I had little time to think. The days were long and hard, filled endlessly with little jobs and duties. Climbing trees, scouting up hills, checking camps, to see if there was any sign of fire. Near the end, there was some heavy rain and we were caught in our tents.

Then my thoughts began to run away from me and the sadness started. Last spring was the last I saw of Lawren. He reported to Camp Borden after we finished our trip in the Park. Later in the summer, I got word in July that Alex Jackson had been wounded at Maple Copse and was recuperating in England. I was angry but relieved he was still alive. Arthur Lismer had moved to Halifax. I was feeling abandoned, not by my chums, but by the world that was forcing us all apart.

I snapped out of it. I finished my sketch. Fourth day in the North and four good sketches.  There is some warmth in the sun. I saw a few chickadees and the gray jays are tending to their broods.