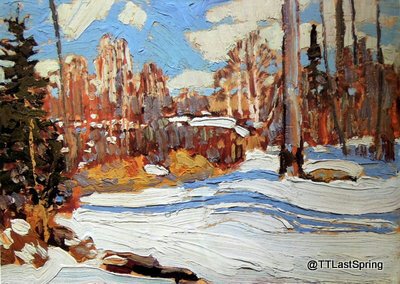 I walked to Potter Creek today. To Joe Lake Dam, then to Joe Lake itself. I passed by the Algonquin Hotel. It’s part of the Grand Trunk Railway outfit. It’s one of the outpost of the Highland Inn that includes Nominigan, and Minnesing. It’s shuttered up tight. It only open after the best of bug season. Around late June.

Today I was looking for a scene in the woods. With the sun getting stronger and the snow melting, the trees cast interesting shadows in the woods. Each day the snow disappears more and more. The nights going below freezing and the days into the fifties makes the snow take on rough and uneven texture. The spring light makes the snow look like a bed of crystals. I guess they are crystal, ice crystals.

Shannon is on a maple sugaring venture. He got the idea from the Highland Inn where they have a sugar bush celebration every year. I remember tapping the sugar maples back home in Leith. I wasn’t crazy about the idea, but my father insisted that we try it. Well we collected the sap but didn’t have a proper boiler. We used an old kerosene tank as a boiler. We scrubbed it and scrubbed it. We thought it was clean, but the maple syrup still tasted like kerosene in the end. I never liked maple syrup from that point on. When offered maple syrup or a lump of brown sugar, I always took the sugar.

Dinner was fine tonight. Annie is the saving grace of this institution that they call Mowat Lodge. We ate in the dining room with the fireplace in full fury. It was another chilly night. Below freezing, meaning that it will be another good day for sap tomorrow. 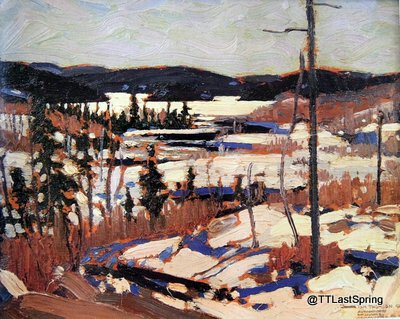 I helped Shannon again this morning. We finished getting the ice blocks from the lake and moved them into the cellar. The worst part of the job is being the cellarman. The cellarman is the one who has to stack the blocks in the cellar and cover them with sawdust. Dusty, dim, and backbreaking work. Moving those ice blocks can be hazardous. They weigh up to a hundred pounds apiece and one slip could mean a broken limb. Shannon likes being the sledman, driving the horses. Lawrie and I were the icemen, the ones who sawed the ice out of the lake.

As always, George volunteered to do the dirtiest and least glamorous work. George joked that nothing in the Park has killed him so far, and it certainly won’t be an ice block in a cellar. George often jokes about death in the Park. I think it’s his way of dealing with the real deaths he’s experienced. Lawrie Dickson is like a son to George because of death. Lawrie’s real father died in a lumberyard accident before he was born. His mother died of dysentery when he was four. And his stepfather drowned in Rosebary Lake when he was six. With no family left, George adopted him as his own, and Lawrie’s been with him ever since. I don’t think he’s ever been out of the Park except for a few trips to Huntsville. He’s always with George.

These deaths also reveal a darker side of the Park. What few people know and really don’t want to know, a deathtrap for lumbermen and labourers. Hardly a week went by without some news of death – drowning, fire, accident. Death is not good for tourism.

George Bartlett, Park Superintendent, and chief cheerleader for Provincial tourism, likes to deal with Park deaths as expeditiously as possible. ‘Hurts tourism if we make too much fuss about what was inevitable in the first place’.

The lumber companies like to keep the deaths at a low profile too. There was too much money to be made. Eggs do get broken for omelettes we want.

After the morning’s labour exploits (and no deaths by ice blocks)
I hiked up to the highest point on this side of the lake. It’s about two miles from the lodge. The condition of the snow was such that it was terrible for snowshoeing and even worse for walking. I was thinking about using skis, but learned that Shannon had inexplicably lost the skis that he had acquired the previous years. It turned out those skis came from some Highland Inn guests that got stranded at Mowat Lodge. Shannon safely returned the guests, but neglected to return the skis. The manager at the Highland Inn caught on and demanded the return of the skis last fall. Hence, according to Shannon, the inexplicable loss of the skis.

After a good hike, I got a good sketch. I was at the highest point that gives a great view. I was so high, that I could not see Mowat Lodge as it was down below, beneath and behind the trees. I could barely make out the Trainor and Blecher cottages, but I had a fine view of Canoe Lake and could see the melt and runoff by the shore. A good picture.

It was fairly warm too. Sketching wasn’t a problem and I finished it in under an hour. 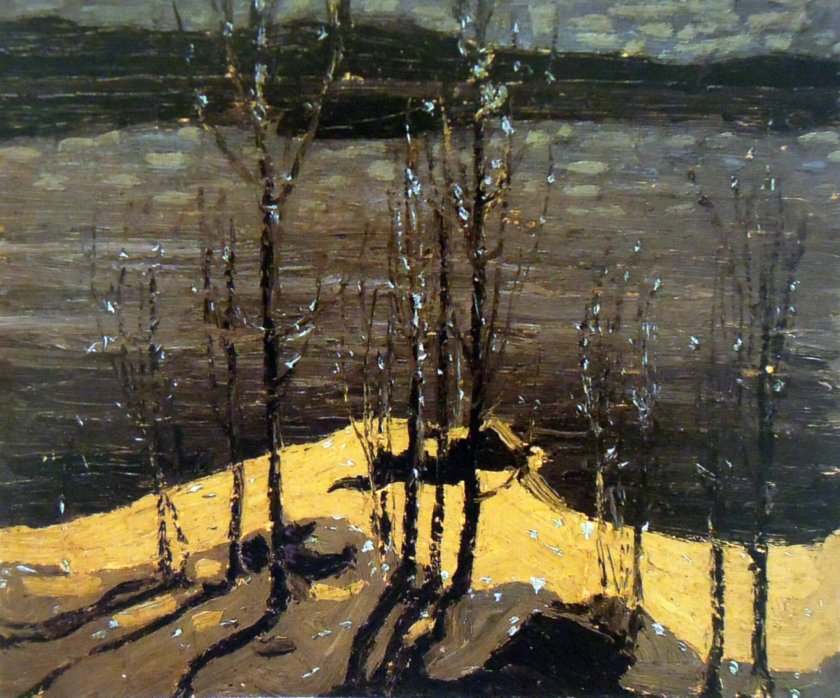 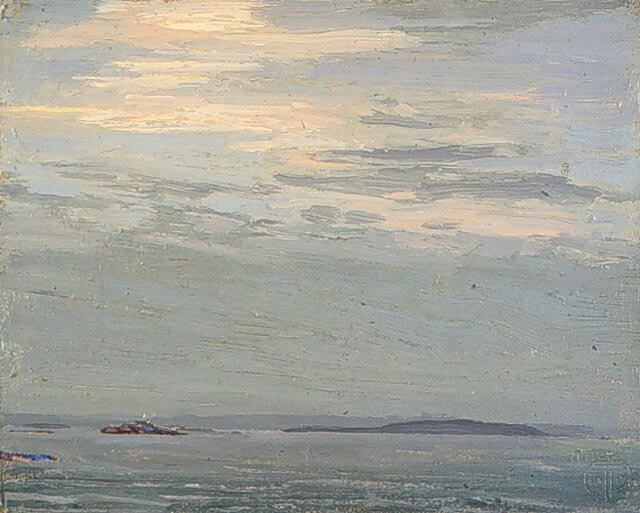 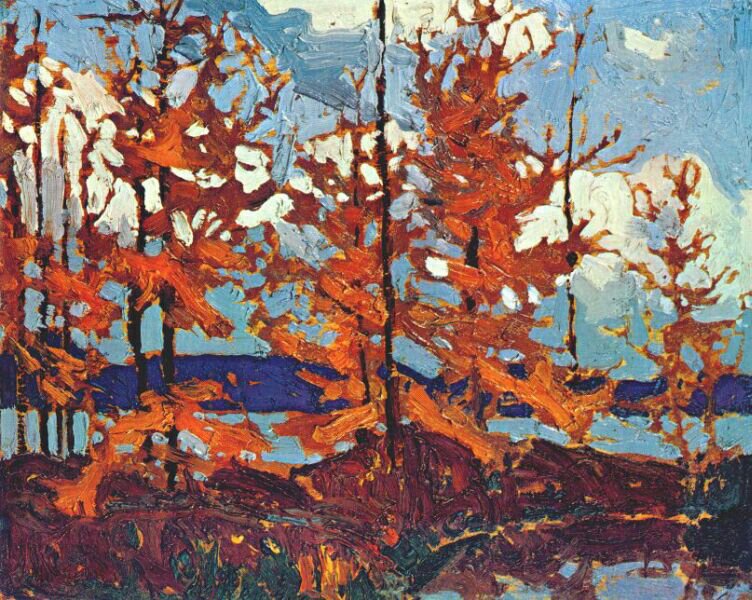 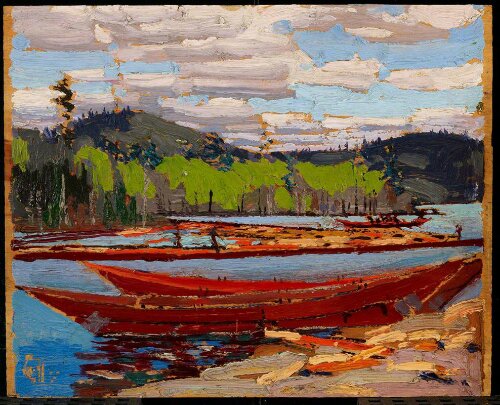 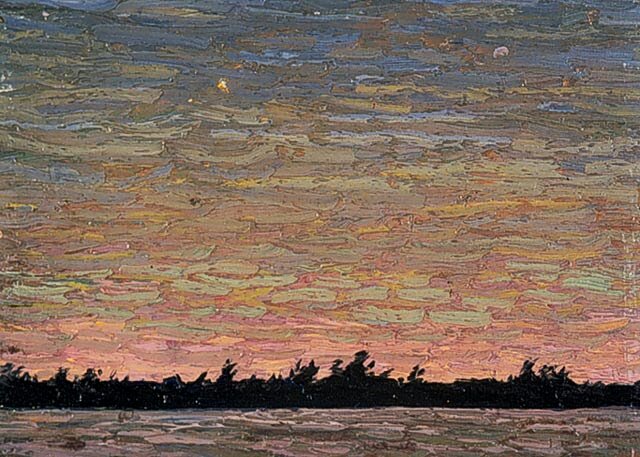 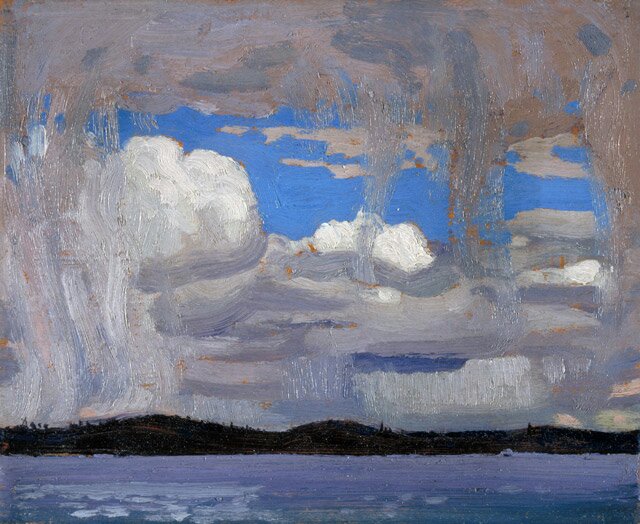 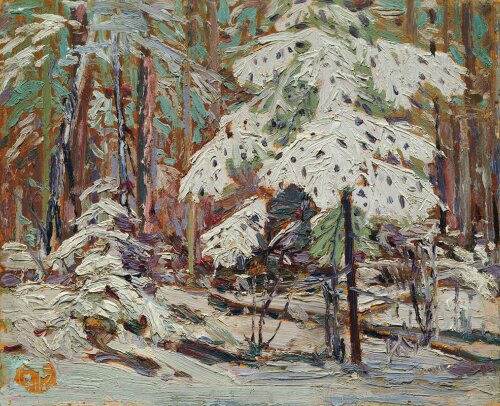