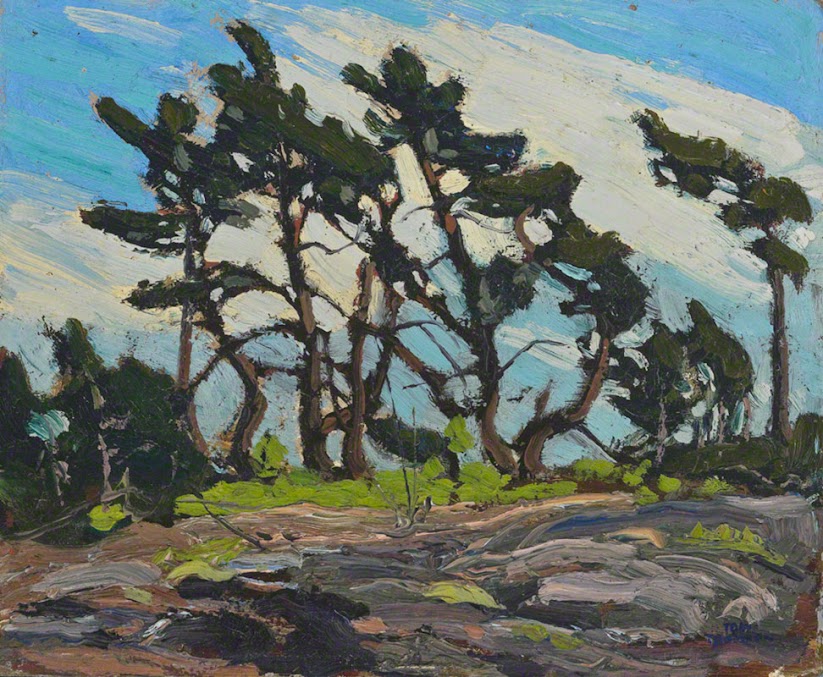 Even though I liked to have a chum with me, I liked being alone better. After my canoe trip with Arthur Lismer in May, he returned to Toronto. I stayed for the rest of the summer. I no longer had to worry about work, money or domestic obligations because of the stipend I was receiving from Dr. MacCallum. A canoe adventure was in my cards.

I took the train west from Algonquin to Depot Harbor. This was the westernmost reach of the J.R. Booth realm. Depot Harbor was the terminus of the Ottawa-Arnprior-Algonquin rail line and as many tourists would descend from Ottawa as there would be from Toronto. A busy little town; I tried to avoid all of the hubbub but it was difficult. I would try to get as far away from the town and sit on the rocks that would jut into Georgian Bay. I was fascinated by the raw power that could be unleashed by a storm. One day the Bay would be a serene blue-green sheet of calm and the next day it would be a wrathful cauldron of grey. I recall the poems of Wilfred Campbell, Lake Lyrics.

My winter months with Jackson were really starting to pay off. That was apparent in the expression of Dr. MacCallum’s eyes when I showed him the sketches I just did. After Parry Sound, I traveled north by steamship and camped with the Dr. at the mouth of the French River. I showed him my sketches and his remark was, “Tom, these are good! They do capture the same feeling when I’m around here.”

Jackson warned me that the Dr. knew very little about art and to be careful and how I should receive his criticism. “Just remember, the Dr. is paying the bills.”

My inclination was to disagree with Jackson. The Dr. might not know about techniques and mechanics or art but he seemed to know what was good to express the northlands. He had the eye of an artist, not necessarily the hands of one.

I accepted the invitation to stay at the Dr.’s cottage on West Wind Island. I stayed for June and July and spent time canoeing and painting with leisure. I had no duties or obligations, only that I would provide the occasional painting lesson to the Dr.’s daughter, Helen.

I enjoyed the time on the island, but the company began to wear on me after awhile. The nature was great, the company wasn’t. Many of the folks vacationing on the island were a plain annoyance. I just wanted to escape from the cake and ice-water socials and find a place to paint in isolation. Despite wanting to be alone, I missed the company of Jackson, Lismer and Harris. Unlike the present company, we could all shut up and paint when the time came. I wrote a letter to Varley asking him to come for a canoe and camping trip but his domestic obligations kept him at home.

Then it hit. The declaration of War, on August 5th, 1914. It was on the same day I was about to depart to Algonquin. It was the day before by 37th birthday. Everyone greeted the declaration of war with great enthusiasm. No one needed reminding that it was actually Great Britain that declared war and the Canada’s decision simply followed suit. I decided I need to get out alone and fast.

I took the steamer from Go Home Bay to the mouth of the French River and managed to purchase an cheap canoe. I canoed east on the French River to Lake Nipissing. At time the river and rapids and treacherous. At one rapids I counted thirteen white wooden crosses – thirteen deaths, most likely, many more.